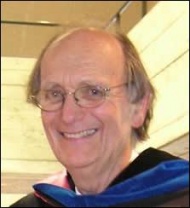 Allan Pred was a famous intellectual geographer who was born in the Bronx, New York City. Allen Pred wrotes in his life 20 books and more than 70 articles. Notable were his three monographs on the role of cities in America's economic development and his later, bolder work on racism in Sweden. His father was a French teacher, his mother a housewife. After his study he met his wife from Sweden. After their marrage they lived between the US and Sweden en raised their two children bi-linquistic.

Allan Pred wrote a lot of books and articles that are important literature in the social science. Titles like Place, Practice and Structure: Social and Spatial Transformation in Southern Sweden, 1750-1850 and Lost Words and Lost Worlds: Modernity and the Language of Everyday Life in Late-Nineteenth Century Stockholm (1990), makes his stature in the social science grew. His new status gives him a lot of awards and honoring for his work. He was honored by the Polisch Acedemy of Sciences and by the Association of American Geographers (2 times) but also awarded for different prices in the geographical science.

Pred was not only a geographical scientific writer and investigator. He also was a teacher at the University of California in Berkely. After a period of 45 years as a teacher he retired in May 2006. Allan Pred died in Januari 2007, at the age of 70.

One of his most influential and widely read work is his Behavioral Approach to Location. This approach considers that decision makers are not entirely rational since they do not have access to all the information they would need to make an optimal decision. To consider this situation Pred developed a representation based upon a behavioral matrix where one axis represented the available information and the other the capacity to use the acquired information (geoclopedie, n.d.). The more information and the greater the ability, the higher the probability of a good location within the spatial margin near the optimal location on cost/revenue grounds (Johnston et. al., 2000, p. 153). Another work that describes the research of Allan Pred as a critical Human Geographer is "Even in Sweden" (2000). In this book Pred writes about the intensifying cultural racism in the 1990's, the proliferation of negative ethnic stereotypes, and the spatial segregation of non-Swedish people (Pred, 2000).

Pred, A. (2000). Even in Sweden, Racisms, Racialized Spaces, and the Popular Geographical Imagination. California: UCPress.