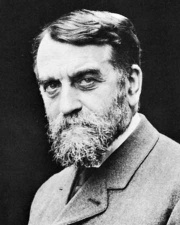 Paul Vidal de la Blanche is a French geographer who was born in 1845 in Pezenas and died in 1918. He traveled a lot and was highly interested in the geographical situation of the Elzas and Lotharingen. His thorough knowledge about this specific region ensured that he published ‘La France de L’ Est’ in 1871. In 1898 he was appointed professor at the University of Sorbonne where he lectured until his death.

Vidal de la Blache is often referred in relation to the concept of Possibilism that he introduced. He spoke and reflected on the possibilities that environments offers. This implies that the physical environment is passive and the active agent is at liberty to choose between a wide range of possibilities. Choice is central. In his 'Principles of Human Geography' (1926) Paul insisted on seeing in nature margins for work of transformation rather than definite, rigid boundaries on human activities (Cloke,Philo,Sadler, 1991,pp.64).

Geographers at that time were occupied with the diverse forms of adaptations to the world. The focus of the geographers was mainly on issues of demography. However, differences in environment were not sufficient to explain why population numbers would vary from place to place. Next to differences in environment Paul introduced two other resource statements, the social factor and the mobility factor. He focused specifically on the social factor or better said the relation between people and environment.

Another central concept that he used is genre de vie. This concept includes the set of techniques, traditions, social organization, values and standards necessary to acquire an existence in a given area. The social system created by a group of people are closely related to the methods that are developed to adapt and cultivate the environment.

Vidal sought a scheme for understanding the interaction of nature and culture that stayed away from both Environmental Determinism and 'radical possibilism' as indicated by Berdoulay (Berdoulay, 1976)

Geografie humaine is yet another concept that came to be associated with him and his school of French researchers during the first two or three decades of the 20th century (Cloke,Philo,Sadler, 1991,pp.64).

Paul Vidal de la Blache and his school of French researches where one of the first researchers who took people more seriously. Vidal developed a geographical approach to challenged the tradition of Environmental Determinism (Cloke, Philo & Sadler, 1991, p. 61). One example is his work Principles of Human Geography (1926). In Principles of Human Geography he insisted on seeing in nature not definite, rigid boundaries on human activity but a margin for the work of transformation or reparation which it is within human power to perform. Vidal sees the world as a dialogue between environment (milieu) and humans (civilisation), there is an ongoing interaction between environment and humans. These interactions creates lifestyles, or like Vidal calls them genre de vie.